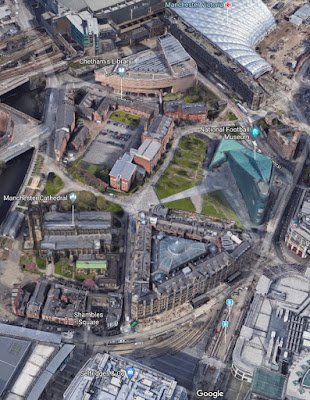 When you think of Manchester you don't usually think of medieval buildings. But tucked away incongruously between Manchester's Victoria Station and Harvey Nichols is a small cluster of 15th century buildings which a casual shopper might not even notice.

We went to Chetham's Music School a couple of weeks ago and said that we would return for a tour of the adjoining Chetham's Library. Dating from 1653, Chetham's describes itself as the oldest public library in the English-speaking world. The building that houses the library is considerably older, however, having been build in 1421 as a college attached to the nearby collegiate parish church.

The library holds over 100,000 books, many of which are beautifully shelved in small stacks, protected by mesh. Some books still retain the chains which were attached to ensure they could not be removed, tethering them to their shelf.

Far away from the hustle and bustle of the modern city outside, Chetham's is an oasis of calm.
One of Chetham's more recent claims to fame is that it is a place where Karl Marx and Friedrich Engels, two German philosophers, studied in the mid nineteenth century and developed their philosophical models which eventually would be published as The Communist Manifesto - a book that would go on to change the course of human history.
A short distance from Chetham's is Manchester Cathedral, a building with a Victorian appearance although it actually dates from the early 1400s. As with many churches, the Victorians felt they had to 'improve' it.
Given its origins, it's not surprising that it looks more like a parish church than a cathedral. In fact, it only became a cathedral in 1847. So it has none of the grandeur of, say, York Minster or Lincoln Cathedral and it also suffered serious damage during the war. Depsite all this, it is a fine building with many lovely features.
We rounded off this very different visit to Manchester with a pot of Lapsang before heading off into the evening rush-hour traffic.
Places