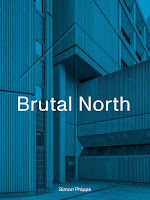 I’ve never been a fan of Brutalist architecture. To me it means big, ugly lumps of concrete, usually in cities, and sometimes placed right next to more traditional buildings for added impact.

But, as someone who grew up in the 1970s, these ugly buildings have always been part of my life. And I realised recently that some of them are disappearing as their structures fail because of poor maintenance and the limited life of concrete.

So I was interested to see ‘Brutal North’, a book cataloguing dozens of examples of Brutalist buildings in the north of England. The photographs, all in brutal black and white of course, show the buildings in all their glory under typically cloudy northern skies.

Apart from Forton Services, my personal favourite is Preston bus station. Built in 1968, it was at the time the largest bus station in Europe and possibly the world. When I arrived in the north west in 1982 I was struck by its sheer size (it could accommodate 80 parked buses simultaneously) and ugliness, as well as how dilapidated it was looking.Within a few years, Preston Council was planning its demolition but there was a surprising level of local affection towards the huge, brutal building. In the end, in 2013, it was granted listed building status which led to a £23 million refurbishment programme. The future of Preston’s Brutalist bus station is assured - at least for now.And this is the dichotemy of Brutalist buildings. They are ugly and, well, brutal. But people get attached to them and don’t want them to disappear, just to be replaced with something more bland.

And the most shocking example in the book? It must be Newcastle’s St James Park football stadium, apparently dropped by aliens into a neighbourhood otherwise rich in beautiful Georgian buildings.